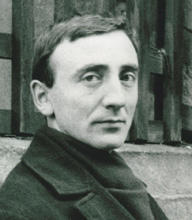 Agostino Bonalumi was born on  July 10, 1935 in Vimercate, Milan. He developed a love of painting very early on. Indeed, he has stated in numerous interviews that drawing and painting helped him to learn about the world from a very young age.

In 1958, In Milan, within the artistic environment that developed around the Brera district, he got to know Enrico Baj, one of the founders of the so-called Nuclear Movement. Baj introduced him to Piero Manzoni, who had links with the group at the time, while a chance encounter at a restaurant with Enrico Castellani led to the birth of a close-knit partnership, which saw the three young artists, Bonalumi, Castellani e Manzoni, start exhibiting their works together as if they were a group, both in Italy and abroad. The partnership carne to a sudden end due to personal reasons, in December 1959. Although he remained dose to the other two for a few years, Bonalumi worked as a solo artist from that point onwards, with no ties to any groups or movements. It was during this period that his later "style" first developed, with a series of works - started in late 1959 - featuring an extroflected canvas.

Between 1960 and 1964 he was rapidly gaining a reputation as an emerging young talent in Italian art with a series of group shows in Berne, Chicago, Antwerp, Lausanne, London and Basel, and two solo shows, one in Rotterdam and one in London. In 1961 he married  Giuliana Oliva. It was at this point that he decided to devote himself entirely to art, despite the concern expressed by his family. However, his wife supported his decision from the start.

In 1966 he began a long period of collaboration with the Galleria del Naviglio in Milan. That same yer he was invited to the Venice Biennale with a group of works, and in 1970 with a personal room. He featured in other international events including Zero Avantgarde, Weiss auf Weiss, IX Bienal de Sào Paulo and presents a solo show at the Bonino gallery in New York.

In the early seventies he began to develop his new "grid" cycle, which he would continue until 1989. He also works on alternative projects, such as the set designs for the Teatro Romano in Verona in 1970, and in 1973 for the Teatro dell'Opera di Roma.

In 1980, an extensive exhibition illustrating the entire arch of his work, was set up by the Lombardy Region in Palazzo Te di Mantova. In 1986 Luca Palazzoli from the Galleria Blu in Milan signed an exclusivity agreement with him, which remained in place until 1997. Meanwhile, in te nineties, having completed the "grid" cycle, he developed a much freer model, based on a steel tube structure that enabled him to produce almost gestural extroflections.

In 2002 the National Academy of San Luca in Rome celebrated with a personal award the conferment to Agostino Bonalumi of the 2001 Presidential Award for Lifetime Achievement. In 2003 the Institut Mathildenhöhe in Darmstadt presented "Agostino Bonalumi. Malerei in der dritten dimension".

Brussels, Moscow, New York and Singapore are some of the world capitals hosting their personal in the last period of activity.

In the summer of 2013 he enthusiastically collaborated on the realization of his important exhibition in London, which, unfortunately, will not see the opening. Agostino Bonalumi dies in Monza on 18 September 2013.