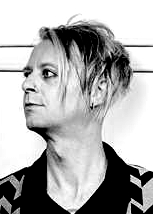 «We love the shocking and original Andy’s art! “Andy’s pictures are stories summarized in a snapshot. They portray a magic world, where every character and every single thing seems to be frozen in the very moment they’re living the best of themselves. There’s sweetness in his stories. His painted images can inspire a peaceful happiness, even when his transformism is deliberately disturbing» (Red Ronnie)

Andy (Andrea Fumagalli) is an established artist born in Monza, Italy, in 1971.

A brilliant art student all through high school, he receives his formal training at Milan’s “Accademia delle Arti Applicate”, specializing in illustration and graphic designing.

Inspired by traditional Italian arts and “pop” culture, seduced by the idea that there’s also room for underground arts, Andy develops a personal painting code, based on the dramatic use of fluorescent acrili colours marked by clear borders. These last ones aimed at combining pictures and persectives in an unconventional way.

“At inspirational level, I consider myself a surrealist painter in the way that I pursue an inner sight where even a TV picture, is always a consequence of oneiric codes”.

Andy paints well known icons from art, music, movie, fashion, as well as icons from cartoons, re-photographing them in a new context driven by personal memories in order to explore the multiple choices of portraying the everyday life.

Andy is also an eclectic musician. In the early 90s, h eco-founds the MTV winner band “Bluvertigo” where he composes, plays saxophones, synths, keyboards and sings backing vocals. A live record and a “greatest hits” get also ublished, keeping him busy in the pro-musician whirlwind of tours, interviews and TV appearances for several years, and still today.

In 2005 Andy founds FLUON factory, his Headquarters and creative centre. FLUON holds in its name Andy’s way of life and through creation: “FLU” as in FLUorescence, but also as in inFLUence, two elements to both spread out and receive in a non-stop flow and constant “ON” mode.