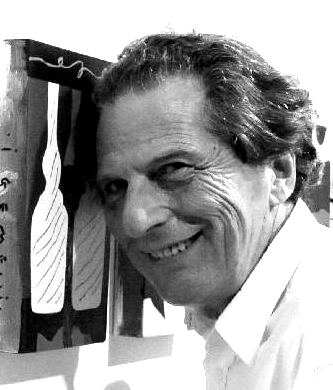 “In De Poli’s paintings there is always something he says and something he whispers, and it is up to the observer to sense all the nuances. Undoubtedly De Poli’s works have not been made straight off: they are based on a vast cultural substratum, on a deep education of the artist that might be underestimated if one did not carefully observe all the details that form the whole. After all, this is his nature: his smiles often hide a touch of melancholy that not everybody manages to catch” (Silvia Petrioli)

He was born in Genoa in 1947, lives in Florence. In 1964 he attends the School of Arts in Florence and gets the specialisation in advertising graphics under the guide of Lucio Venna. At the beginning of the 70s he produces a series of works that Renato Barilli defines “rich art”: I ricordi londinesi [London memories], Stivani Gallery, text by Renato Birilli, 1973. He take part in numerous and important art exhibitions. Interested in the world of design, he created "furniture-objects" and collaborated, together with Eugenio Miccini and Antonio Bueno, in the creation of the magazine "Visual". In 1984 he moved to Rome (hosted by his friend Mario Ceroli), where he began a new cycle of works entitled Rome. In the same year he participates in the XXIX National Art Biennial of the City of Milan. Solo and group exhibitions follow one another, Fabio De Poli presents large-format paintings, graphic works, "artist's books". He created the magazine "Meta, words and images". In 1992 he participated in the Italian Artist's Book exhibition at the Museum of Modern Art in New York. In 1996 he released the monograph Fabio De Poli, works 1969-1996, published by Polistampa, and the following year he exhibited in Satura di Genova presented by Paolo Minetti.

In 1998 he exhibits with Mario Ceroli in Sala d’Arme –Palazzo Vecchio, in Florence. In 1999 Gillo Dorfles and Paolo Minetti present in National central library in Florence his artist book “Pour Moi”. He realises he first virtual exhibition, “The most beautiful art exhibition in the world”.

In 2000 he takes part to the “Archivio della Biennale delle Arti del Mediterraneo” [Archive of the Biennial of Mediterranean arts] in Salerno. He is present in paper museum in Pietrabuona (Pescia). He exhibits in Livorno, Bottini dell’Olio, “Le stanze della meraviglia” (catalogue, Guastalla edition). He realises a collection of 50 original collages for Fiditoscana.

In 2002 he is mentioned in the volume history of Italian Art of the XXth century, Bora edition, edited by Giorgio di Genoa. One small sculpture is exposed in the museum of Parco in Portofino. In Motrone, for Casafarsetti, he realises the performance Ibis and George. In Florence, Palazzo Vecchio, in occasion of “tribute to Monicelli” re makes an affiche of the film Parenti Serpenti. Hr delivers a work dedicated to September 11th to American consulate in Florence. He opens at Palace Hotel in Vasto a space for art directed by Nicola Cucinieri, and realises a permanent exhibition of 63 new works “Ritratto continuo”.

In 2003 in Milano, he realises an anthology to Farsetti Art gallery. In Vasto he realises two external mosaics with 100 sqm surface on a house designed by Studio Dearch.

In 2004 he starts cooperation with Gianni and David Overi and designs a collection of furniture for Mirabili art of living.

In 2005 he designs a 60 m long glass wall for the new hospital Meyer in Florence. For Comune di Pistoia he presents a great work “Parlarsi”. He places places a colored iron sculpture, "RossoAirone", dedicated to the Municipality, in Viale Verdi in Montecatini. Together with Andrea Rauch he writes three books for children “Notte di luna” (winner of Andersen prize), “Zan-denti” and “Pinocchio”, Volo edition – Florence.

In 2006 he realises the prize “Capalbio Cinema”. He makes the sculpture GEORGE for comune di Fiesole to be placed in Piazza Mino, for Christmas 2006.

In 2007 he designs the glass wall of the new Museo della Resistenza in Siena.

Since 2009 he has been the artistic director of the Usher Arte Gallery in Lucca, where, in October 2010, he inaugurates a solo show dedicated to Robespierre.

In 2011 he exhibited at the Museo delle Genti in Pescara and in 2012 at Palazzo Mattioli, in Vasto. In the same year he opens at Palazzo Farnese, Ortona, the exhibition “Le stanze della meraviglia” [The rooms of wonder], and is present at the Museum of Contemporary Art in Montecatini – MO.C.A..

In 2013 he held a personal exhibition in Florence; the following year he exhibited in San Donato in Poggio, Palazzo Malaspina and participates in the wine-art project of the Fattoria di Sant’Appiano (Barberino val d’Elsa) creating the labels for the wines of the year and proposing an exhibition inside the cellars.

In 2015 he created the “Dante 750” sculpture for the MO.C.A. (Montecatini Contemporary Art Museum), is artistic director of the Art Corner space at the San Giorgio Library in Pistoia; exhibits at Artspace 8 in Chicago.

In 2016 he exhibited at the Pinocchio Park Museum in Collodi; in 2017 he held a solo show at the MO.C.A. in Montecatini Terme and in 2019 at Marino Marini Foundation, in Pistoia.