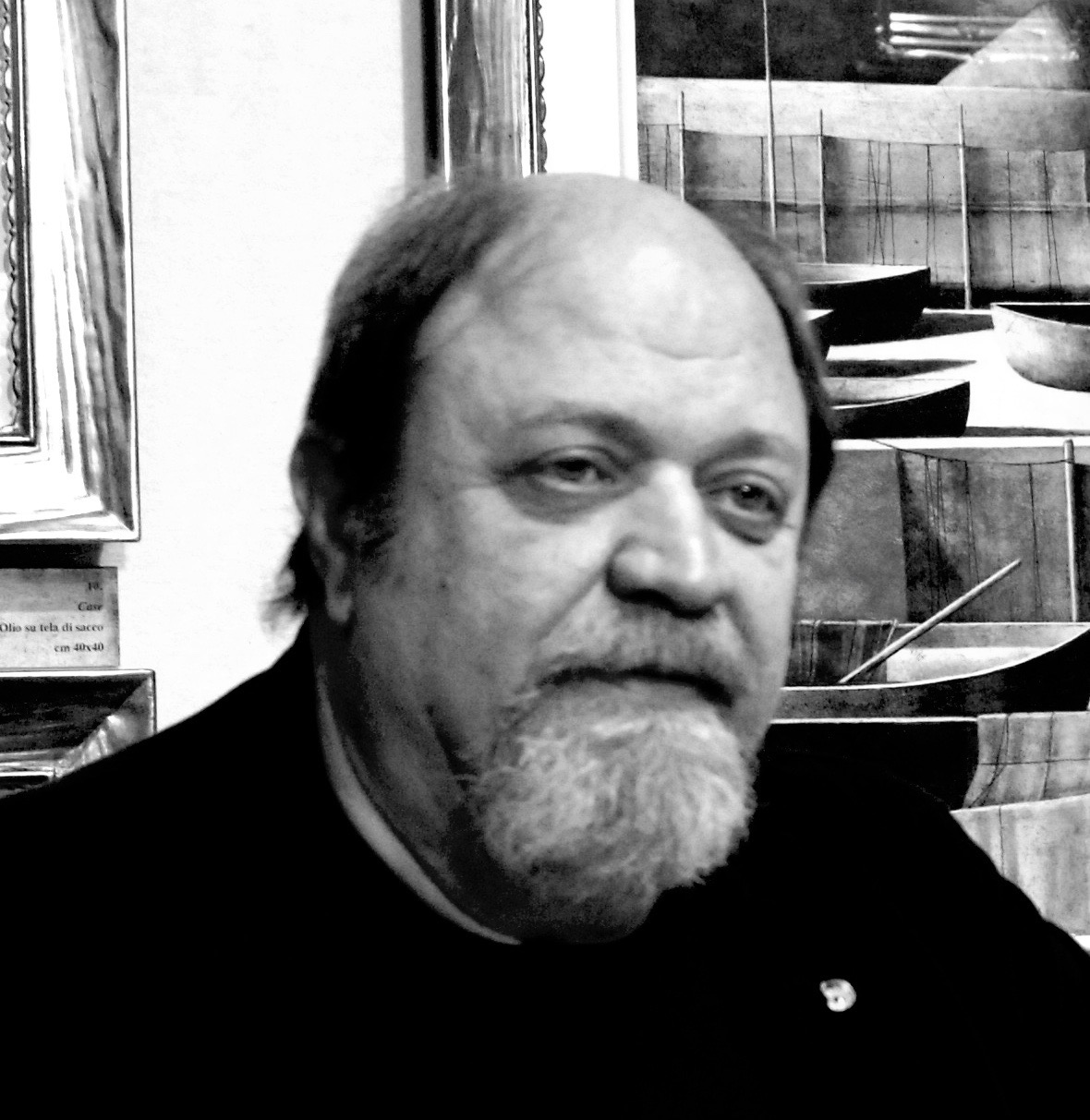 «For a talented, sensitive person like Scuffi, painting is evoking memories that have faded in the hectic, ravenous rat race, thus reawakening long-lost feelings for those who can see. Even more, it is offering the figment of beauty to those who have forgotten how to daydream, as we used to do as children before the gray marquee of a circus. To those who have stopped listening to the lazy sounds of the ocean, the melodious song of the moon, the truth of mankind transformed into ghosts by the burdensome script of an uncertain, sarcastic existence» (Giovanni Faccenda)

Marcello Scuffi was born on September 25th, 1948 in Tizzana, a small village in the province of Pistoia. He soon showed his passion for drawing and painting and taught himself the art. He started as an amateur in 1970, but since 1973 he has dedicated his entire life to painting.

From the beginning of his artistic career, he appeared in several collective art and solo exhibitions. He lived and worked in Brussels in 1977 and 1981. For the last twenty years, he has lived between Quarrata the coastal area in Versilia.

Marcello Scuffi’s work is well known and appreciated in Italy but also abroad, in particular in France, Belgium and Switzerland.  His paintings have aroused the interest of art critics but also of renowned writers who have often published essays and papers on his work.

Since 1972 he has organized over fifty solo art exhibitions, most of which took place in important museums and prestigious institutional sites.

[…] Marcello Scuffi’s paintings have that concise material and clean composition we had lost after the Tuscan frescoers of the 1300s. Nevertheless, the intimacy of the towns and mountains is much more modern, as well as the attention he puts in the most humble details […]

[…] Scuffi is a simple man, always ready to be enraptured before unexpected encounters. In his simplicity, I seem to notice the metaphysical prerequisite by which he observes any common and even mundane object as though it were new, brilliant, and marvelous.  After all, Scuffi’s painting has always investigated following this path, perhaps never aware that he was penetrating the ambiguous, enchanted, occasionally bewildered world of metaphysics […]

[…] His paintings highlight a long, meditated process where the erection of those lines determining and framing the shapes clearly express that Scuffi works constantly on that layout, thickening the carefully prepared base with his colors […] there is an obviously constant reference to elementary geometry: lines, planes, dihedrons are the never-denied tools […]

[…] Scuffi’s sensitivity is expressed in the archaic, distant mood of environments filled with mysterious lymph. Like in an almost calcinated world, far from the concept of time and real life; a world where air is thick and light is imprisoned in the shapes and clotted on the worn mirrors of the houses, limited by the trunks of the trees destined to frame spaces and distances; vaguely winking at Morandi’s discreet tonal effects […]

[…] There is Rosai’s Tuscan painful paucity in this artist who insists in highlighting his land and its weather. Scuffi depicts a dry, rocky Tuscany, and not the sweet rolling hills studded with cypress trees.  The southern coastal Tuscany that Carrà had previously captured in his paintings. The reference is obvious but never inferior to Carrà, whose dry poetic complexity and even some pictorial patterns return in Scuffi’s work […], but only because the latter wants to conduct his idea, engrossed and almost hallucinated in the motionless deserts that are his landscapes. Nevertheless, his settings are never dramatic; rather, motionless in their ecstatic timelessness […]

[…] If we abstract from the subject, and therefore from the story the painting depicts, and concentrate on the formal logistic of the visual structure, we notice Scuffi’s marked inclination to construct the spaces according to perspective coordinates. But most of all, the architectural balance of sculptural layouts leading you to consider Scuffi’s painting as a mental process, as in Da Vinci’s notion. In other words, an enclosure managed by an arrangement rule aiming not so much at the perfection of geometry, rather at identifying an ideal place where the incidents of existence find a possible elevation, a poetic dissolution that may relieve them of their fleeting substance, redeem their temporariness. In these terms, the stage machinery becomes a symbolic site […]

[…] Scuffi’s art is essentially an art that awakens memory. But beware, it is not the dreamlike memory or Freud’s prospection. For Scuffi, memory is something deeply bound to the environment, to the land, to the objects experimented through the senses and daily life […] It must be specified that his painting makes no direct reference to real visions. In other words, the artist refuses to seize the object; his painting is never plain air, never an optical approach. Scuffi calls himself a realist; it is a matter of principle that includes also the rejection of what could be the new-metaphysical trend, that is, the idealistic trend[…]

[…] Deposits of old trains with the Tuscan Apennines as a backdrop; slightly metaphysical desert coastlines; suburban circus marquees; sleepy landscapes; still-lifes, enchanted moonlit nights. A world with no humans and no concept of time, crystalized in the silent wait for a miracle. Paintings that fill silence with history and recreate the present and the past to give sense to the future.

[…] Scuffi’s intent is to find a measure, an exact formal balance that will cross the passing of time without looking hopelessly outdated. His aspiring to eternity requires the annulment of the dimensions of time […] and annulling the endless alternation of time means projecting space and objects within the limits of Metaphysics, therefore in a mental field that aims at grasping nature not as we see it, but in its original essence, its primal meaning. Nature purified, freed of useless tinsels, ready to evoke not our sensorial emotions, but our thoughts […] In Scuffi’s works, everything is necessary, everything is essential […]

[…] I wonder how much he actually aspires to overcome the limits of visible reality, to reveal an unsettling, unexpected meaning of the objects removed from the predictable spaces that contain them and plunged into an upsetting, mysterious environment.  Or perhaps, he aims at evoking and restoring the purified essence of the visible reality that has captured his enthused, astonished eye. Therefore, the true object of each of Scuffi’s sacred representation in the empty sceneries, appears in its entirety: silence. The silence of the fleeting days and of the memory retaining them; the silence of the objects that appear in the light, and that night obliterates […]

[…] In his forty years of work, Marcello Scuffi has been compared to big names of the past, from Masaccio to Piero della Francesca (except that I would go even further back to Maso di Banco, in the 14th century) to de Chirico, Carrà, Rosai, Morandi, and Casorati. Nevertheless, I would never define him as an artist who quotes others; rather, he an artist who belongs […]

[…] When you escape the frenzy that life forces upon you; when you are face to face with your soul and you can’t escape it, that’s when you need to evaluate who you are in relation to what you have. And that is when loosing yourself in one of Marcello Scuffi’s painting may come in handy. Many critics say that he paints memories, but I don’t completely agree. I don’t see the past in his paintings, rather, an eternal, suspended present […]

[…] Never grandiloquent, rather walking a path that is silent, authentic, and unique because he’s experienced it thoroughly, Scuffi proudly declares that his reasons are not only a choice, but a reaction. In his silence, he cries against the distancing interference of the dogma imposed by contemporary art that is anxiously trying to become academic. Scuffi’s themes have been recurring all through these decades, offering that principle of order, almost a composition sobriety featuring a painter who is proudly hostile to the outcry of officialdom.  With the simple language of painting, he repudiates the insisted exhibition of the tortuous morbidities nurturing his, and our historical times […]

[…] Scuffi expresses what Kandinsky defined an “inner need” by developing contemplative, meditative works on the metaphysical implications linked to the expression of an absence through which the artist transfers his experience of life, the memory of an existence, the perpetuation of a tradition […]

[…] For a talented, sensitive person like Scuffi, painting is evoking memories that have faded in the hectic, ravenous rat race, thus reawakening long-lost feelings for those who can see.  Even more, it is offering the figment of beauty to those who have forgotten how to daydream, as we used to do as children before the gray marquee of a circus. To those who have stopped listening to the lazy sounds of the ocean, the melodious song of the moon, the truth of mankind transformed into ghosts by the burdensome script of an uncertain, sarcastic existence […]

[…] His technique and colors are simply a means to implement his paintings, because the true essence is his soul, suggesting impressions and permanently guarded memories. At first glance, one would never imagine this soul in the overflowing expression of the artist, but it is the real essence of the man and the artist he is. It is precisely from the merging of these two aspects of his personality that his work is enriched, as his talent as a painter is paired by the sensitivity of his soul and the brightness of his mind […]

[…] Marcello Scuffi can see beyond the visible shapes with the simplicity of the ones who are free from mental frames. These paintings are the art of a person who was offered a new opportunity in life, and seized it, loved it and ultimately painted it.