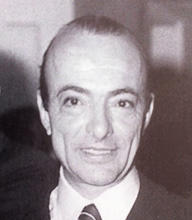 Nino Tirinnanzi was born in Greve in Chianti (Florence), on 11 August 1923. From a wealthy family, from early childhood he had as a human and cultural guide Domenico Giuliotti, a companion of Giovanni Papini in initiatives that have left their mark in the literary history of the Italian twentieth century. Nino Tirinnanzi studied at the Art Institute of Florence until October 1936, the year in which he met Ottone Rosai, from which he immediately became a student. Together with his teacher, still a teenager, he meets in famous places haunted by poets, writers and intellectuals such as the "Giubbe Rosse", where he knows, among others, Eugenio Montale, Carlo Emilio Gadda, Tommaso Landolfi, Mario Luzi, Elio Vittorini, Alfonso Gatto, Alessandro Parronchi, Vasco Pratolini, Mario Tobino.

With the outbreak of the Second World War, he was called to arms and sent to Rhodes; during the German occupation of the island he flees to Turkey, then moves to Syria, Lebanon, Palestine, stopping in Egypt, where he finally stops and manages to resume work long suspended until the repatriation in 1946. Since then the successes in painting and drawing follow one another continuously. In fact, Nino Tirinnanzi was invited to all the most important public exhibitions held in Italy in the late twentieth century. For this purpose, his participation in the Venice Biennale and the Rome Quadrennial as well as the numerous awards at the "Fiorino" prize are worth a mention.

His friendship with Sandro Penna and Pier Paolo Pasolini belong to the period when he stayed in Rome, between the Sixties and the early Seventies, as well as the attendance of the many painters and intellectuals met at the "Caffè Greco". For many summers, at his residence at Forte dei Marmi, he has as his friend and primary interlocutor the Nobel Eugenio Montale. On one of his journeys to London, he met Francis Bacon.

Nino Tirinnanzi died in Greve in Chianti on December 9, 2002.