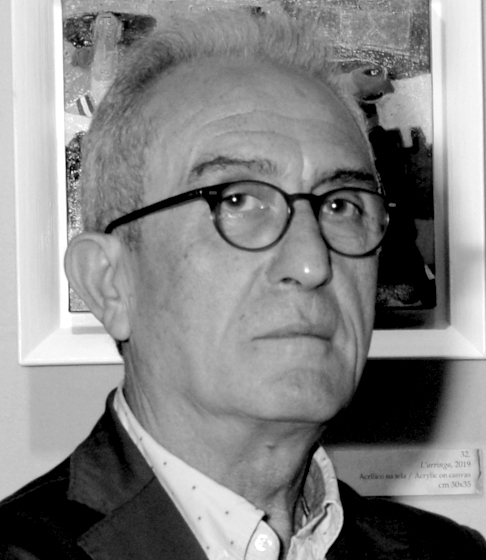 «Those who know Pino Procopio are aware that he is quiet, essentially meditative, locked inside his impenetrable works; but at the same time, serene, slightly reserved, his gestures and words carefully controlled. His mind instead, is unbridled, constantly at work; his need to reread history, philosophy, and poetry always lurking behind his apparently simple and understandable work... The humanity that Procopio wants to depict imposes its presence, communicates by telling about its existence, that viewers must catch from the details, the atmosphere of the message, which is cryptic despite its seemingly ingenuous image» (Mariastella Margozzi)

Pino Procopio is a painter, sculptor and illustrator from Italy, an exponent of the representational art. Artistic studies started at the art school of Catanzaro, but completed in Rome, where in 1982 he graduated in Architecture at the University “La Sapienza”. He is one of the most important Italian painters on the contemporary scene, inspired by an inexhaustible imagination. In 2002 he made the painting for the poster of the “World Book and Copyright Day” organised by UNESCO. In 2003 the government monopolies commissioned him a painting that had to be put on the ticket of the European Lottery. In 2004 he made the painting that will be placed on the ticket of Lotteria Italia. In 2005 the Ministry of Communications promoted one of his exhibitions in Rome, about the evolution of the Italian postal service in 100 years of history. In 2008, in Rome, the Boncompagni-Ludovisi museum of the “Galleria Nazionale d’Arte Moderna e Contemporanea” (GNAM) organised “Ulisse, scene di un viaggio”. In the 2014 the Galleria Nazionale d’Arte Moderna e Contemporanea” (GNAM) invited him to take part in the collective exhibition CORPORATE ART, which aims to represent the combination of art and industrial customers.

In 2017, with the patronage of UNESCO and MIUR, the exhibition “Baadaye, Pinocchio d’Africa” took place. It was a new modern version of the story of Pinocchio, linked to the tragedy of immigration.

In 2019, with the sponsorship of the Polo Museale della Puglia, he is invited to take part in the collective exhibition on the artist's book "Artist's Books. The art to read"

In 2019 the municipality of Ascoli Piceno commissioned him the realisation of the prestigious “Palio della Quintana” of the historical August joust.